Our school hockey team trains on a Thursday after school. This year they completed The IHA Hockey Skills Challenge and will soon receive their Bronze Certificates. During the year they take part in friendly blitzes for fun, both here at Scoil Bhríde, and at Naas Hockey Club. We are currently preparing for the Kildare Primary School Blitz which takes place in Naas in March.

In February we had great excitement as the captain of the Irish Hockey team Megan Frazer came to visit our school. She took a session with the hockey team and taught us some of her tricks and skills! She also did a Q and A session with the girls, in which they learned a lot about persistence, training hard and never giving up. 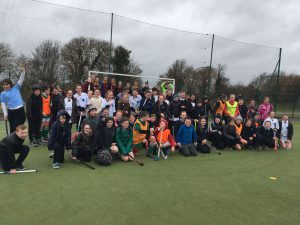 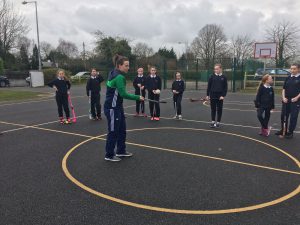 Hockey skills at the blitz 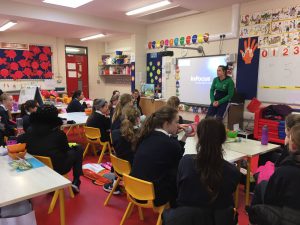 Basketball:
Basketball training started for our sixth class girls in September. We were delighted with number of girls who signed up for basketball this year and also with our new indoor basketball facilities. During the year we compete in a number of competitions:

Every year a team is chosen from the 6th class basketball group to compete in the Cumann na mBunscol Large Schools Basketball League which takes place in November and December. This year, to prepare for the league the girls played a friendly match against Prosperous at home in Scoil Bhríde on Wednesday 25th of October. This was our first official basketball match in our new sports hall. The girls played very well and won the match. We then competed in the league against Presentation Girls’ School Maynooth, Scoil Bhride Nass, Sallins and Carragh. The girls played really well in all of their matches but unfortunately they did not progress to the next round.

In recent years we have extended our basketball training to 5th class students. Currently, weekly training sessions for 5th class are held at lunchtimes from September to May. These sessions aim to develop fundamental ball skills and co-ordination and to teach the rules of the game in preparation for competitive matches in 6th class. The response to extending basketball training to 5th class has proved very successful with more than 35 girls signing up this year. These girls will also take part in our In School Basketball Blitz at the end of the year.

Cumann na mBunscol 2018 – Senior Girls Football training has resumed and is open to girls in Fifth and Sixth class. We will have lots of matches to play after the Easter break.

Senior Camogie will restart after Easter for girls from 5th and 6th class.  We are in Division 1B. There are three teams in our division including Mercy Convent Naas and Scoil Bhride, Kill. The competition starts on the week of the 30th April with a bye for us in the 1st round.  We had great success last year after getting out of our section and finishing 2nd in the division so we look forward to building on this achievement this year.