[x_text]The Presentation Sisters came to Clane from Carlow, Portlaoise and Fair Street, Drogheda and founded a convent in 1839. The foundress was Mother Teresa Brennan. The building to which they came had been used as an orphanage and had been run by the Patrician Society. It was probably built circa 1818.
We do not know the exact date of the opening of the first Presentation school in Clane nor when it came under the Department of Education as old registers and roll books were destroyed. However, judging by the roll number 1151, it is assumed that it became a national school at a very early date.
In the beginning, the Sisters taught Reading, Writing, Arithmetic and Spinning. There was also a special emphasis on Religious Instruction. The children were prepared for First Holy Communion and Confirmation.
In 1929 the convent school was renovated with money left by a lady to Fr. Laurence Kehoe who was parish priest at that time. New wooden floors were put in the three main rooms, folding doors divided the largest room and new fireplaces replaced the antiquated ones that had been there for the previous one hundred years. Up to 1929 the school had been the property of the Presentation Sisters but after its renovation it became parochial property. These renovations have stood the test of time enabling the building to function as a school into the 1980’s and from then on as a multi-purpose community resource area. It has recently been refurbished and is used by the community as a Parish Centre and Meeting Point. 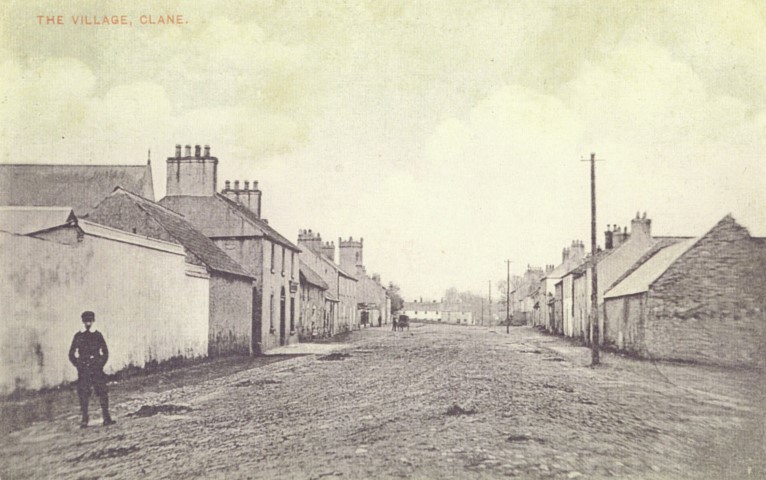 In common with many other villages within commuting distance of Dublin, Clane has undergone dramatic demographic and social changes in last twenty years. It has gone from being a rural linear settlement to a bustling satellite town of Dublin. Its population has risen from 1594 in the late seventies to 3126 in 1996. Current estimate of population is 4,012 (TBC).
Traditional employers such as the farming and bloodstock industries, the Defence forces and state companies such as Bord Na Móna and E.S.B. have diminished as a percentage of total employers in the area. The majority of those working have found employment in high-tech computer industries, Intel and Hewlett Packard, and light industries and in service industries generally situated outside the village.
Strategic long-term planning on the part of those involved in education provision in the area has played a major part in the expansion of the village. Sr. Perpetua Lonergan R.I.P. was sent to Clane in the early 1970’s. She was a lady of vision and she instigated the purchase of a large field on the Prosperous Road which became the site for three schools – Scoil Bhríde, Scoil Phádraig and Scoil Mhuire Community School. By this time, due to increasing numbers, both primary and secondary school pupils were being taught in prefabs on the convent grounds and on the Prosperous Road.
After much lobbying of Government officials and campaigning, three state of the art schools were built. In June 1982 when the building of Scoil Bhride was completed, the pupils and their teachers marched from the convent school to their new premises. The proud principal at the time was Sr. Louise Eustace. She was replaced in September of that year, by Sr. Raphael McDonagh. Sr. Aloysius Barrett became principal in September 1987 and the last religious principal was Sr. Gemma Corcoran who was principal from September 1998 until September 2001.
The current principal is Ms. Deirdre Costello who was appointed in the summer of 2001. Mrs. Costello is a former member of staff and taught the senior classes. There are now no teaching religious sisters on staff but the ethos of the school established by the Presentation Sisters is very evident and continues throughout the school.
The facilities in these modern schools were understandably the envy of many large towns in the country. Today, as the population increases with the influx of skilled workers and their families, these schools are struggling to deal with the increased demands imposed on them.
In March 2014 the sod was turned and the building of the new 10 classroom two-storey extension began. Staff and children moved into our beautiful new school on Friday 27th February 2015. Work then began on the refurbishment of the existing school. We hope to celebrate the Official Opening of the” New Scoil Bhríde” in October 2015.
The transition of the school from a rural to an expanding urban model presents challenges for those in management in terms of cementing together a school community. The response of those in education – management, teachers, parents has been to establish a Parent`s Association in 1986 which provides a forum for debate and an opportunity for parents to participate actively in the community of Scoil Bhríde. Our parents Assoc. has gone from strength to strength over the past 25 years. It greatly enhances the child`s experience of life in Scoil Bhríde[/x_text]